John Travolta must have breathed a sigh of relief when it appeared that his legal woes seemed to be disappearing right before his eyes.   The entertainment media was reporting on the case dismissals of John Doe 1 and John Doe 2 before the courts even had time to dismiss them.  Travolta’s attorney Marty Singer was dancing with glee and such terms such as “vindication” frothed from his lips in jubilation.  Then Venus retrograde reared her head in the form of Gloria Allred.

On Wednesday (May 16, 2012), famed civil rights attorney Gloria Allred took on the case of John Doe #1 according to Radar Online.   Allred told RadarOnline.com:

“I represent John Doe #1. Mr. Doe’s lawsuit was dismissed without prejudice which means that he is still legally entitled to file another lawsuit against John Travolta if he chooses. We are in the process of conferring with him regarding the next steps, which he may wish to take. Our client and our firm has [sic] no further comment at this time.”
To make matters worse for the Welcome Back, Kotter star, Thursday proved to be even more of a downer as John Doe #2 is now being represented by Allred as well.  Allred stated that she believed that the lawsuit should be filed in a different court, but gave little indication as to the date of the filing or the jurisdiction.

Our question is, “Is Gloria Allred a game changer in the lawsuit(s) against Travolta?”

Once again we used Ciro Marchetti’s Gilded Tarot to answer these questions.  We used a 3-card spread to answer our query. 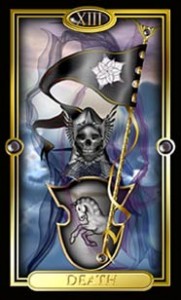 Card:  10 of Swords – This is a very interesting card because it reflects that a difficult situation has reached its climax, and that the circumstances soon will be over.  Perhaps, this card reflects the end of the relationship between John Doe 1 and John Doe 2 with their former attorney Okorie Okaracha.  This dovetails into our feeling that Okaracha just was not adept enough of an attorney to handle this type of landslide case.

Card:  The Chariot – In most traditional books this card has to do with battle.   Allred is famous for taking on sexual abuse cases, and she has a rather impressive record.  The card usually reflects that movement will often be slow, but the battle will be won.  If I was John Travolta, I would be very concerned about this card falling in the present position.

Card:  Death – This really amplifies the meaning of the Chariot since both are watery card and give each other added power.   This case is far from over, and if anything Travolta’s reputation and any past sexual activities will definitely come to light.  John could have tremendous difficulty overcoming this force of nature. 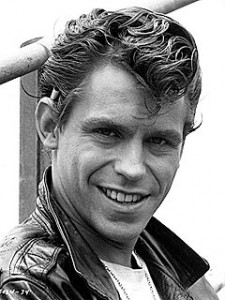 In other John Travolta sex scandal news, RadarOnline is now reporting that a 4th accuser is contemplating whether or not he will jump into the legal fray.  The accuser, a gym employee, states that John ‘groped and folded him against his will.’  Mary Singer (Travolta’s attorney) denies the allegations stating that he expects many John Doe’s to jump on the bandwagon in the future.

Also, EOnline is reporting that John Conway left a suicide note in 2006 revealing that he was groped by Travolta.  The incident led to the ending of their friendship.

Our suggestion – come on out John, the water is fine!

What do you feel about Gloria Allred taking on this case?  Leave your comments below.

Update:  Two more accusers have stepped forward in the John Travolta sex scandal.  You can read more about it on RadarOnline