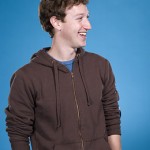 Mark Zuckerberg is a lucky guy!  This week the CEO/Founder of mega social media site Facebook took his company public and has netted an estimated 19 billion.   Now, he has changed his Facebook status from single to married. Zuckerberg, who has been dated medical student Priscilla Chan since their days at Harvard, made an honest woman out of her on May 19, 2012.  The … END_OF_DOCUMENT_TOKEN_TO_BE_REPLACED